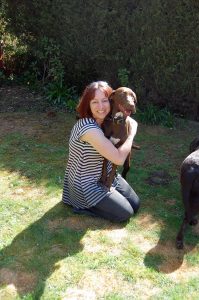 Sharing your life with a dog who suffers from an obsessive behaviour is never going to be easy. Behaviours such as shadow chasing, fly catching, tail spinning, blanket sucking, and persistent barking can drive you, (or your clients), to distraction and is stressful for the dog too. However there are many things you can do to help the canine sufferer to calm down and even get over the fixation. Find out how with this comprehensive webinar on Canine Compulsive Disorder (CCD). It includes information and advice on:

The causes of canine compulsive disorder

How to make positive, simple changes to help manage the condition

Calming the environment, emotions and conflict that may trigger CCDs

Equipment and tools to manage your CCD dog

Toni has worked with dogs and wild canids since the late 1980’s; during a long and successful career with the Guide Dogs for the Blind Association she quickly progressed from kennel staff to supervisor and then to staff training. In 1997 she studied under Linda Tellington-Jones and other top Tellington TTouch Instructors, becoming one of the first pupils to qualify as a Companion Animal Practitioner in the UK. In 2000 she left GDBA to pursue her passion for the Tellington TTouch Method and is now one of the highest qualified practitioners in the UK.
In 2001, Toni joined the UK Wolf Conservation Trust, where she went on to become a Senior Wolf Handler and Education Officer for the organisation. Through observing the wolves at close quarters, Toni developed a unique insight into their behaviour which led her to question the prevailing popular ideas about the alpha theory in dogs – ideas which often came into direct conflict with her own knowledge and observations gained at first-hand.
Toni has contributed numerous features to national dog magazines, rescue society newsletters and website blogs and made many appearances on TV and radio. Her first book, The Truth about Wolves & Dogs, was published in 2012, and her second, Among the Wolves: Memoirs of a Wolf Handler, in 2015. Karen Bush and Toni now co-author a series of books called HELP! My Dog…., These mini help books include subjects like car travel, canine compulsive disorder and noise phobia, with many more books planned.
In 2015 Toni studied with Jo-Rosie Haffenden to become a Real Dog Yoga Instructor and in 2017 she updated her skills in behaviour with a qualification from the International School of Canine Psychology & Behaviour with whom she is also an affiliate.
As well as working privately with clients, Toni runs workshops, seminars, gives talks, webinars and demos in Tellington TTouch and Real Dog Yoga. She lives with her husband and rescue dog Mr P in Berkshire, England.