Epilepsy beyond seizures: what do behaviourists need to know? 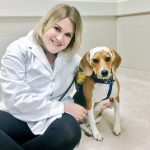 Epilepsy beyond seizures: what do behaviourists need to know?

– Epilepsy is the most common chronic brain disease in dogs, affecting around 70,000 dogs in the UK alone
– Although several daily medications are available to try and reduce seizure frequency in affected dogs, many continue to seizure long term despite being treated with several drugs
– Canine seizure types include generalised seizures where dogs lose consciousness and convulse, and focal seizures where dogs remain conscious, may be subtle and can be mistaken for behavioural abnormalities
– Common side effects of anti-epileptic drugs (AEDs) include lethargy, extreme hunger and wobbliness which may compromise quality of life
– In addition to seizures, many dogs with epilepsy experience behavioural problems including anxiety, both as a side effect of AEDs and independently as co-morbid disorders
– This webinar will explore cutting edge research on epilepsy, how it is now being considered a general brain disorder including both seizures and behaviour abnormalities, novel therapies to tackle epilepsy holistically including evidence-based nutritional therapies, and how behaviourists can become a vital part of the team managing epilepsy alongside owners and vets

Once you have paid, YOU WILL BE REDIRECTED TO A PAGE WITH THE RECORDING LINK AND HANDOUT SO YOU CAN GET IMMEDIATE ACCESS, PLEASE SAVE THE PAGE URL / LINKS AS THEY WILL NO LONGER BE EMAILED OUT

For any questions please email intcaninebehaviourists@gmail.com

Dr Rowena Packer is an animal behaviour and welfare scientist at the Royal Veterinary College, London, and currently holds a BBSRC Future Leader Research Fellowship. Rowena’s research group explores both mental and physical health in domestic dogs, with a strong focus on epilepsy and abnormal behaviour. Her work uses a variety of methods including behavioural and cognitive testing, endocrine measures, electroencephalography (EEG) and MRI analysis. Rowena holds a first class BSc (Hons) in Animal Behaviour and Welfare from the University of Bristol (2009), and a PhD in Veterinary Science from the Royal Veterinary College (2013). In 2016 she was awarded the UFAW Young Animal Welfare Scientist of the Year award.